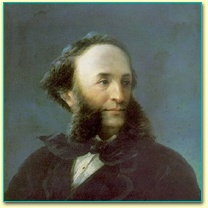 Aivazovsky was born on 17 July 1817 (29 July New Style) in the city of Theodosia in the Crimea (There was a big Armenian colony). His father  was well-educated man. Hecalled himself Haivazosky.

Drawing ability of young Aivazovsky attracted the attention of A. Kaznacheyev, the town-governor, who helped Aivazovsky to enter the high school at Simferopol and in 1833, the St Petersburg Academy of Arts.At the age of twenty he graduated from the Art Academy of St. Petersburg with a gold medal.  At the age of 25 he have already gained international fame.

During the period of 1840-1844 Aivazovsky, as a pensioner of the Academy of Arts, spent time in Italy, traveled to Germany, France, Spain, and Holland. He worked much and had many exhibitions, meeting everywhere with success. He painted a lot of marine landscapes, which became very popular in Italy: The Bay of Naples by Moonlight (1842), Seashore. Calm (1843), Malta. Valetto Harbour (1844).

Delacroix referred to him in reverence and Turner called him a genius. Aivazovsky's name is intricately bound with the sea. "Perhaps no one in Europe has painted the extraordinary beauty of the sea with so much feeling and expressiveness as Aivazovsky has", writes V. Adasov.

In the course of his work, Aivazovsky evolved his own method of depicting the motion of the sea – from memory, without preliminary sketches, limiting himself to rough pencil outlines. Aivazovsky’s phenomenal memory and romantic imagination allowed him to do all this with incomparable brilliance. The development of this new method reflected the spirit of the age, when the ever-increasing romantic tendencies put an artist's imagination to the front.

When in 1844 the artist returned to St. Petersburg, he was awarded the title of Academician, and became attached to the General Naval Headquarters. This allowed him to travel much with Russian fleet expeditions on different missions; he visited Turkey, Greece, Egypt, America. From 1846 to 1848 he painted several canvases with naval warfare as the subject; the pictures portrayed historical battles of the Russian Fleet The Battle of Chesme (1848), The Battle in the Chios Channel (1848), Meeting of the Brig Mercury with the Russian Squadron... (1848).

Neither financial security nor life in Palace interested him. He returned to his native land, built a workplace/home on the seashore and, until the last days of his life, dedicates himself to the work that he loved.

Great painter died in 1900. According to his wishes, Aivazovsky was buried in the Armenian Church of St. Sarkis in Theodosia. His tombstone has a quotation from historian Khorenatsi's "History of Armenians" - "Born a mortal, he left immortal memories". The "memories" condense in them the spirit of the times and the most precious spirit of all time - that of Humanism.

Aivazovsky left more than 6000 pictures. Most of his works are world-famous.