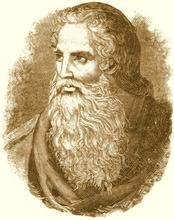 Movses Khorenatsi  (Khorenatzi) (Armenian: Մովսես Խորենացի) was an Armenian historian who lived in Armenia during the 5th century AD.

He was an author of the one of the earliest known historiographical works on the history of Armenia. He wrote the book "The History of Armenia"  at the behest of Prince Sahak Bagratuni. Movses Khorenatsi's work holds particular significance because it contains unique material on the old oral traditions in Armenia before its conversion to Christianity and, more important, traces Armenian history from Movses' day to its origins. For his important contribution in development of Armenian historiography Movses Khorenatzi is considered to be the "father of Armenian history" (պատմահայր).

He received his education in Syunik and later continued it in Alexandria (Egypt).