What is the Armenian Genocide?

The extermination of Armenians in the Ottoman Empire and the surrounding regions during 1915-1923 is called the Armenian Genocide.

Those massacres were masterminded and perpetrated by the government of Young Turks and were later finalized by the Kemalist government.

The First World War gave the Young Turks the opportunity to settle accounts with Armenians living in the Ottoman Empire, thus implementing the decision of the secret meeting of 1911 in Thessaloniki.

The plan was to turkify the Muslims and to exterminate the Armenians living in the Ottoman Empire. Talaat Pasha (Interior Minister), Enver Pasha (Minister of Military Affairs), Djemal Pasha (commander of the Palestinian Front), Behaeddin Shakir Bey (Young Turk Central Committee member) and others were among the orchestrators of the project.

Intending to annihilate Armenians, they wanted to eliminate the Armenian Question. Armenia and Armenians were an obstacle on the way of the project of the Yong Turks. Their dream of “Great Turan” was to stretch from the Bosphorus to Altai. During the First World War the Young Turks perpetrated massacres against Assyrians, Greeks and Arabs living in the Ottoman Empire.

In February 1915 the military minister Enver Pasha ordered to eliminate the Armenian soldiers serving in the Army. On April 24 and the following days 800 Armenians were arrested in Constantinople and exiled to the depths of Anatolia. Armenian writers, journalists, doctors, scientists, clergymen, intellectuals including Armenian members of the parliament were among them. A part of them died on the way of the exile, while others died after reaching there.

The first international response to the violence resulted in a joint statement by France, Russia and the Great Britain in May 1915, where the Turkish atrocities against the Armenians were defined as “a crime against humanity and civilization”. According to them, Turkish government was responsible for the implementation of the crime.

How many people died in the Armenian Genocide?

There were an estimated two million Armenians living in the Ottoman Empire before the First World War. Approximately one and a half million Armenians were killed from 1915-1923. The remaining part was either islamized or exiled. 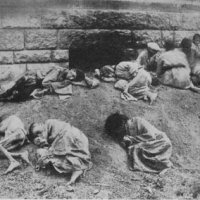 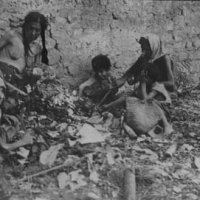 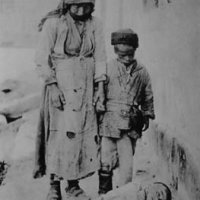 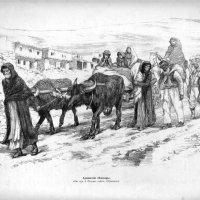 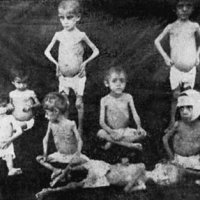 children_being_cared_by_christian_missionaries
erzerum armenian highlands in eastern anatolia. burial of the victims of the october 30 1895 massacr...
execution of armenians in the constantinople june 1915
starving armenian deportee children in desert 1915
the transportation of refugees_photographer_parakhovod
victims_armenian children

Why was the Armenian Genocide perpetrated?

When WWI erupted, the government of the Young Turks adopted the policy of Pan-Turkism, hoping to save the remains of the weakened Ottoman Empire. The plan was to create an enormous Ottoman Empire that would spread to China, include all the Turkish speaking nations of the Caucasus and Middle Asia, intending also to turkify all the ethnic minorities of the empire. The Armenian population became the main obstacle standing in the way of the realization of this policy. Besides, the constitution restored after the Revolution of 1908 promised equal rights to all citizens of the Ottoman Empire. Armenians enthusiastically embraced this opportunity, however the change of status of previously deprived Armenians increased the hostility of  the Turks towards Christians. This  hostility was formed long ago, as even in the conditions of deprivation Armenians of the Ottoman empire provided unprecedented social, cultural and economic development. The genocide was a means to suppress this ascent, as well as to seize the Armenian wealth created during decades.

The Young Turks used WWI as a suitable opportunity for the implementation of the Armenian genocide, although it was planned in 1911-1912.

The mechanism of implementation of the Genocide

A genocide is the organized extermination of a nation aiming to put an end to their collective existence. Thus, the implementation of the genocide requires oriented programming and an internal mechanism, which makes genocide a state crime, as only a state possesses all the resources that can be used to carry out this policy.

The first phase of the Armenian Genocide was the conscription of about 60,000 Armenian men into the Ottoman army, their disarmament and murder by their Turkish fellow soldiers.

The second phase of the extermination of the Armenian population started on April 24, 1915 with the arrest of several hundred Armenian intellectuals and representatives of national elite (mainly in the capital of the Ottoman Empire, Constantinople) and their subsequent elimination. Hereinafter, Armenians worldwide started to commemorate the Armenian genocide on April 24.

The third phase of the genocide is characterized with the exile of the massacres of women, children, elderly people to the desert of Syria. Hundreds of thousands of people were murdered by Turkish soldiers, police officers, Kurdish bandits during the deportation. The others died of epidemic diseases. Thousands of women and children were subjected to violence. Tens of thousands were forcibly islamized.

The fifth phase is the universal and absolute  denial of the Turkish government of the mass deportations and genocide carried out against Armenians in their homeland. Despite the ongoing process of international condemnation of the Armenian Genocide, Turkey fights against recognition by all means, including distortion of history, means of propaganda, lobbying activities and other measures.